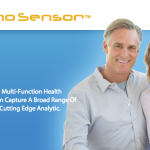 It’s all US right now, with healthtech, the Internet of Things and free college courses grabbing big money this week.

Star Trek Tricorder that much closer as DynoSense nabs $9 million

Healthtech company Dynosense brought in $9.4 million in Series A that will help the company meet US regulations and to bring its “multi-function health scanner” Dyno to market.

In something that sounds like the Star Trek medical scanners that can detect broken bones and infections in seconds, this machine will analyze 33 separate health metrics in a minute according to a press release. Like other medtech, the device can generate reports and send them on to doctors for further analysis.

The funds will reportedly go toward expansion in the Asia Pacific region, expand sales and grow its support infrastructure.

Free Courses Get a Boost with $49 million for Coursera

American company Coursera raised $49.5 million in Series C for its growing online platform for free university courses. The company partners with colleges and universities across the US.

Read more on the story here.

Big data startup BlueData scored major partnership dollars this week with Intel as it completed a $20 million funding round.

The company’s software EPIC helps client systems to run Hadoop and Spark in a “virtualized environment,” simulating a “cloud-like experience” for big data projects. The press release further describes their software as enabling users to “spin up virtual Hadoop or Spark clusters within minutes” to access analytics and data.

The company is based in Mountain View, California and was founded in 2012 by CEO Kumar Sreekanti and Tom Phelan.

If you can spare 5 minutes, Spare5’s new $10M round might give you some extra cash

The idea is that it is something people who are bored on their phones or waiting between bus rides could use to add value for their down time. The financial incentive also serves as a motivator.

The new capital will go toward expanding the company’s small staff of 13, according to CEO Matt Bencke. Current corporate clients include Getty Images and Groupon.

Link Labs bolsters its Internet of Things potential with $5.7 million

Maryland-based communications company Link Labs, which engineers networks on low power for IoT systems, brought in $5.7 million in Series A according to a Tuesday press release. Key investors in this round included TCP Venture Capital, Blu Venture Investors and the Maryland Venture Fund.

Link Labs markets a hardware system called Symphony Link, which allows for wider-range wireless communication. The company looks to better integrate its technology with newer appliances, focusing in on the Internet of Things. The company works on building management, asset tracking, and smart agriculture among other industries according to a press release. Their devices are adaptable to networks in North America and Europe.

The company was founded by CEO Brian Ray in 2013. The company also announced a distribution agreement with Future Electronics earlier this week.