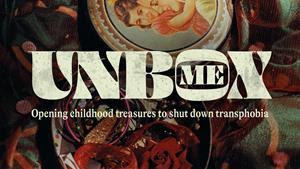 NEW DELHI, India and NEW YORK, March 30, 2022 (GLOBE NEWSWIRE) — In the lead-up to the International Transgender Day of Visibility on March 31, UNAIDS and FCB have partnered to launch “Unbox Me,” an initiative aimed at raising awareness for the rights of transgender children by empowering them to stop hiding their identities and embrace their true selves. Part of the #SeeMeAsIAm campaign, “Unbox Me” is the latest collaborative effort from UNAIDS and FCB, whose ongoing partnership also included “The Mirror” in 2021.

“Unbox Me” is a creative exploration of the theme of secrecy and hiding, and the campaign aims to spotlight the struggles of transgender children, like their being closeted and their discomfort with their assigned gender, many as early as the age of two.

Swati Bhattacharya, FCB India’s Creative Chairperson, who conceptualized this campaign, said, “In India, children usually have a box which they use to store their most precious possessions. In the case of trans children, however, they need to hide their box of treasures, since some of their most precious possessions don’t fit the gender norm that society expects them to conform to.”

She added: ““Unbox Me” shows exactly that, every box opened revealed someone’s true self. We sent these boxes to prominent people in the community, who then unboxed them on their social media feeds, sharing their feelings and thoughts as the reality of countless children suppressing their spirit became a tangible reality one could experience.” The videos are a play on popular unboxing videos, in which people unpack gadgets and toys. Only this time, the unboxings have a much deeper meaning.

UNAIDS and FCB played on the theme of trans children being no different than any child who loves creating hiding places and what their hidden possessions reveal about that child’s identity, preferences and dreams. For trans children, the act of hiding treasures becomes a way of hiding their identity from disapproving eyes. “Unbox Me” is an effort to symbolically unbox their secrets to the world and open the conversation for so many transgender children out there — not just in India, but everywhere.

The creation of “Unbox Me” is a partnership between FCB’s India and Chicago offices, exemplifying how FCB brings together talent and expertise across its global network to create impactful work, work that addresses a global topic.

On the campaign, Mahesh Mahalingam, Director, Communications and Global Advocacy, UNAIDS, said, “Gender diversity is not just an issue for adults but for those of all ages including children. There are thousands of children like the ones who provided their boxes all over the world who want to express and claim their identities. And they should not have to wait until they become adults; it is too late by then.”

He added, “As parents, as teachers, as brothers and sisters, as community members, we have to recognize and nurture children for who they truly are. Each of the objects in the boxes is a plea to be heard, to be loved, to be recognized.”

“Unbox Me” builds on similar messages seen in UNAIDS and FCB’s work from their yearlong partnership. For International Transgender Day of Visibility in 2021, they released “The Mirror,” an award-winning film written by Bhattacharya that features a young boy looking in the mirror and dressing up as a woman to raise awareness about gender identity during childhood.

The “Unbox Me” initiative has already seen participation from prominent figures, like Indian filmmaker Zoya Akhtar and popular TV journalist Barkha Dutt, and continues to garner support from the education community. Teachers at many schools have spread the message among their own teacher-student-parent community (e.g., The Shri Ram School, The Millennium Schools, the Mussoorie International School and Vasant Valley, to name a few). It will now travel to schools across India.

A study by the Indian Journal of Psychological Medicine indicates that 31% of transgender persons in India end their life by committing suicide, and 50% of them have attempted suicide at least once before turning 20. Recent cases of suicide by students who identified as trans in Bareilly and Noida in Uttar Pradesh are clear indicators of rejection and abuse.

About FCB
FCB (Foote, Cone & Belding) is a global, award-winning and integrated marketing communications company with a heritage of creativity and success dating from 1873. Named Cannes Lions 2020/2021 Global Creative Network of the Year, Adweek 2020 Global Agency of the Year, 2020 Ad Age A-List and the #1 Global Network on The Good Report 2020, FCB focuses on creating Never Finished campaign ideas that have the power to transform brands, businesses and communities. With more than 8,000 people in 109 operations in 80 countries, the company is part of the Interpublic Group of Companies (NYSE: IPG). Visit fcb.com or follow @FCBglobal on Instagram and Twitter and FCB Global on Facebook and LinkedIn.

UNAIDS
The Joint United Nations Programme on HIV/AIDS (UNAIDS) leads and inspires the world to achieve its shared vision of zero new HIV infections, zero discrimination and zero AIDS-related deaths. UNAIDS unites the efforts of 11 UN organizations—UNHCR, UNICEF, WFP, UNDP, UNFPA, UNODC, UN Women, ILO, UNESCO, WHO and the World Bank—and works closely with global and national partners towards ending the AIDS epidemic by 2030 as part of the Sustainable Development Goals. Learn more at unaids.org and connect with us on Facebook, Twitter, Instagram and YouTube.

A photo accompanying this announcement is available at https://www.globenewswire.com/NewsRoom/AttachmentNg/e2e293dc-0a09-4b9a-83ef-91348696d9dc

A video accompanying this announcement is available at