NEW YORK, May 11, 2018 (GLOBE NEWSWIRE) — Mr. Leonard Schutzman, Chairman and Chief Executive of Arbitrade, a leading coin and cryptocurrency exchange, said today the company had purchased the first item of the Nelson Mandela Golden Hands Collection. It was, he said, a solid gold cast of Mandela’s fist made during his lifetime by the Harmony Gold company at his home in Johannesburg in 1964.

Arbitrade had made the purchase in accordance with the contract drawn up with the seller, Mr. Malcolm Duncan, a South African businessman in March 2018, whereby the company had agreed to buy the iconic collection that includes 3 life size impressions of Mandela’s hand and 2 others of his palm and the fist.  The contract calls for Arbitrade to buy one item of the collection at quarterly intervals throughout the course of this year. East of the three remaining will cost $2.5 million. 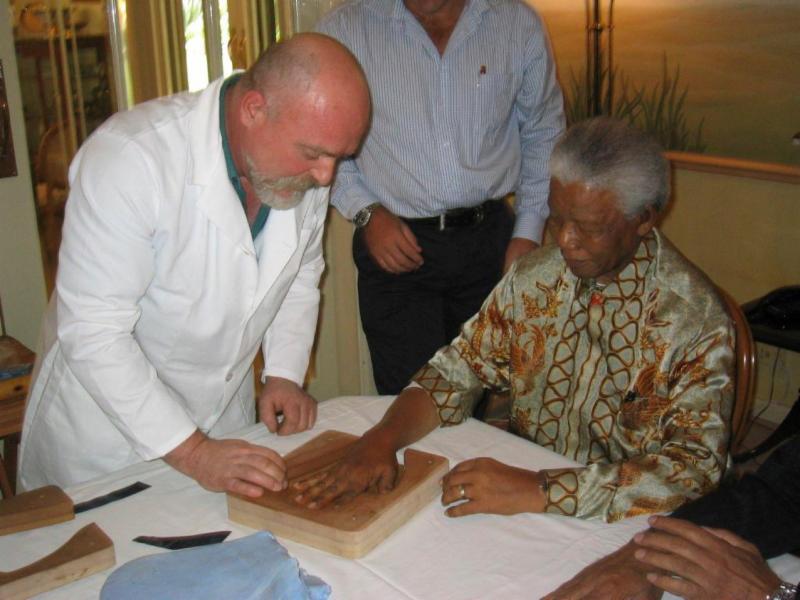 Mr. Schutzman said, the company was pleased to have agreed to purchase the collection and was especially pleased to have acquired the 1964 cast of Mandela’s fist. “It’s interesting to note that when it came to casting the fist, Mandela insisted on placing his thumb next to his fingers as opposed to in front. He deemed it a less aggressive representation of his victory of apartheid. It was typical of the man.”

Mr. Schutzman went on to say that apart from it being an expression of the company’s deep admiration for Mandela in this, the 100th anniversary year of his birth, it was also an expression of the company’s attachment to gold and all that South Africa has done through the years in supporting the gold industry.  “We intend to acquire significant amounts of gold in the coming months in order to back the coins that Arbitrade will be producing.  In acquiring the collection, we feel we had made an exceptional investment and that it is singularly appropriate that we should mark our company’s interest and our intentions through the acquisition of this iconic collection.”

Mr Schutzman said Arbitrade intends to show the fist in the coming weeks and even before taking possession of the entire collection, had pledged, with Mr. Duncan’s support, to exhibit the artifacts in various overseas capitals. “We want as many people as possible to see the collection and to recall Mandela and his life and times,” he said.

Mr. Schutzman said, it was Harmony’s intention to make a full set of artifacts including the fist, to mark each of the 27 years Mandela has spent behind bars.  “Our set is dedicated to 1964 and 1990, marking the year Mandela was first incarcerated on Robben Island and the year he walked through the prison gates a free man.”

He confirmed the complete set and the fist had been authenticated by Harmony Gold and is in the possession of Arbitrade together with several photographs of Mandela making the cast at his home in Johannesburg. He said these artifacts are believed to be part of an only surviving set.  All others having been destroyed by order of Nelson Mandela.

ARBITRADE, through its proprietary software and strategic partnerships, plans to be in all segments of the cryptocurrency business, including currency mining, trading (The ARBITRADE Exchange) gift cards, debit cards, money transfer and Point of Sale processing.

1 Photograph of Mandela and Harmony making the casts of Mandela’s hands.
1 Letter of Authenticity covering the fist from Harmony Gold.

Photos accompanying this announcement are available at
http://resource.globenewswire.com/Resource/Download/bc285f28-3c2a-4a30-bad8-a5eef37d040f